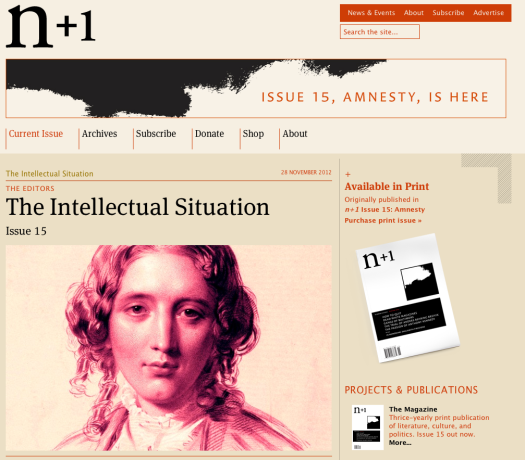 N + 1 has published an essay in their November, 2012 issue titled, “The Intellectual Situation”. It is a frolic through the current “serious” national commercial literary front, with assorted, some frontal others just a hip bump, attacks on The Atlantic, Harpers, The New Yorker and finally the Paris Review. The subtext is how each are dealing with the ravages of the internet and its affect on circulation and revenue. The other subtext is gender war relative to readers: women are the internet and guys do sports offline while articulating their guttural vocabulary.

The piece lands some good jabs, the beautification of the Paris Review that makes up for the dearth of content and the gentrification of Harpers. But on the other hand, who is watching? The American literary scene has exited stage left, hasn’t it?

The piece is reminiscent of a William F. Buckley show in its day, very smart,very shrewd and full of arrogance for its own enjoyment. Well, one must make news in some fashion. When the editors are done it looks like Muhammad Ali standing above his laid out opponent, taunting him to get up.

Is it too much to ask to have wanted a bit of self analysis since it appears N+1 seeks the literary road to the stars? It publishes three times per year and is probably looking at a motivation that will take them to quarterly or monthly.

It’s a fun piece with some truths and some interesting history for those sorts and some economic knowledge for the MBAs.

One Reply to “N + 1: The Intellectual Situation”