Many of Brunovsky’s illustrations are explorations of Adam and Eve characters; they are depicted in the midst of the natural world of plants and trees and are captured in ways that promote a very strong affinity to their surroundings – the same makeup, the same DNA perhaps. The humans look like they belong in their surroundings and to great extent are equalized, that is to say, they are stripped of modern arrogance with the emphasis on mental and consciousness power structures and the man made objects which we lose ourselves in. This is good. Human consciousness in the developed world needs to reengage with the earth, with their own – the animals and plants – to self create again the respect for all of life in this world, on this planet.

I have also included an illustration he did on death and the sea.

Albin Brunovsky (1935-1997) was a Czech artist and illustrator that worked in woodcuts, linocuts, chalk lithography and many other mediums. His commercial subject matter was varied – from children books to currency. He was also a professor and later started his own engraving school. The works shown here are some of his studio work. It is here that his passion, when he was able to summon it, was expressed:

I have such a creative program that pushes me to work. My pictures are simply doing with me what they want. Sometimes I don’t feel like working. But when I come to my studio and I notice, that one work is not ready and the other one hopeless, I go and sit next to them for a while and suddenly I realize that there is evening. And in this way every morning I let myself to be pleasantly abused by my paintings that allow me to dream. (Albín Brunovský) 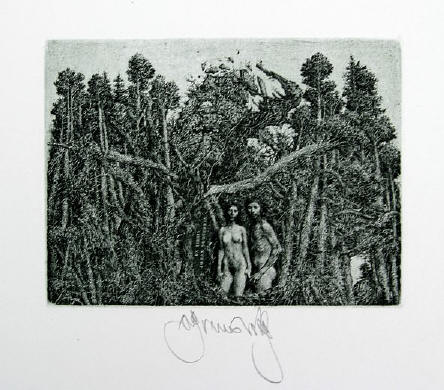