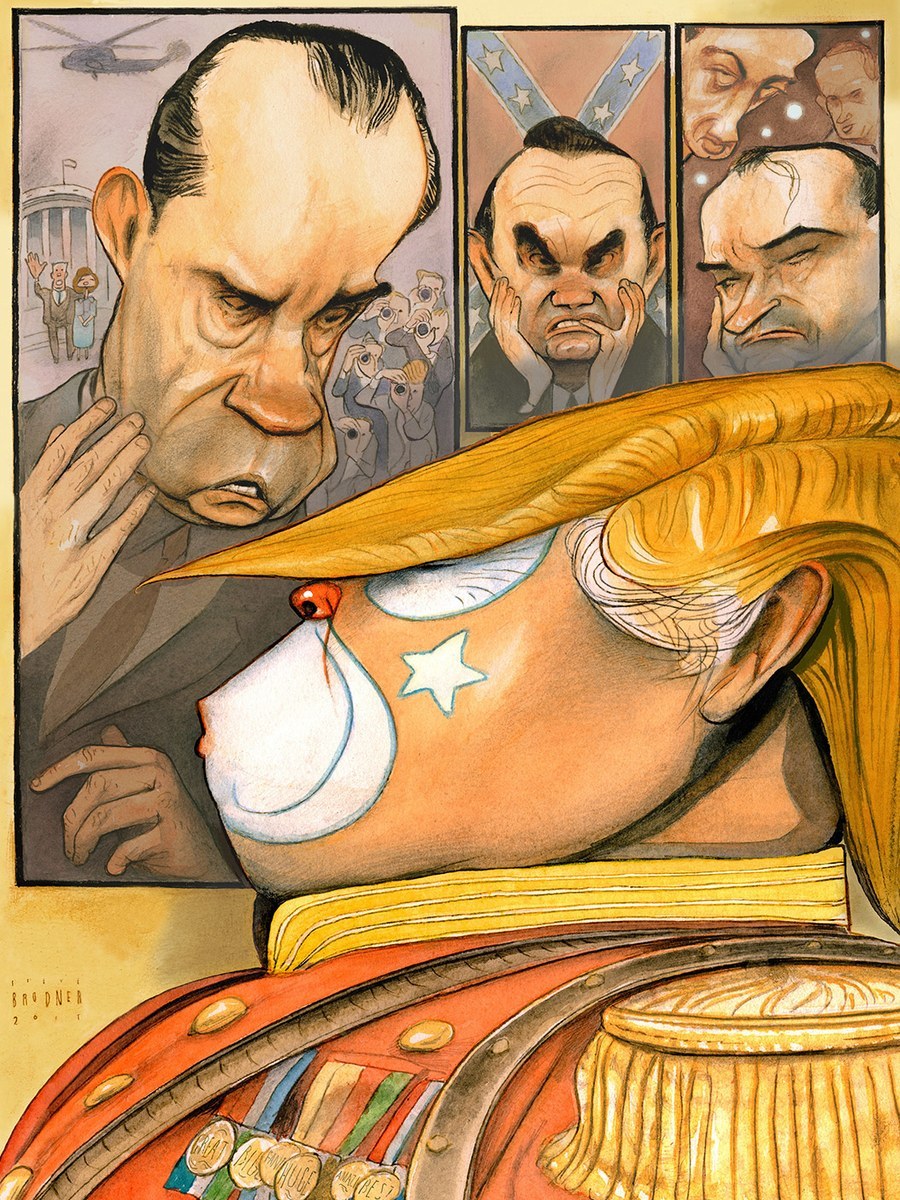 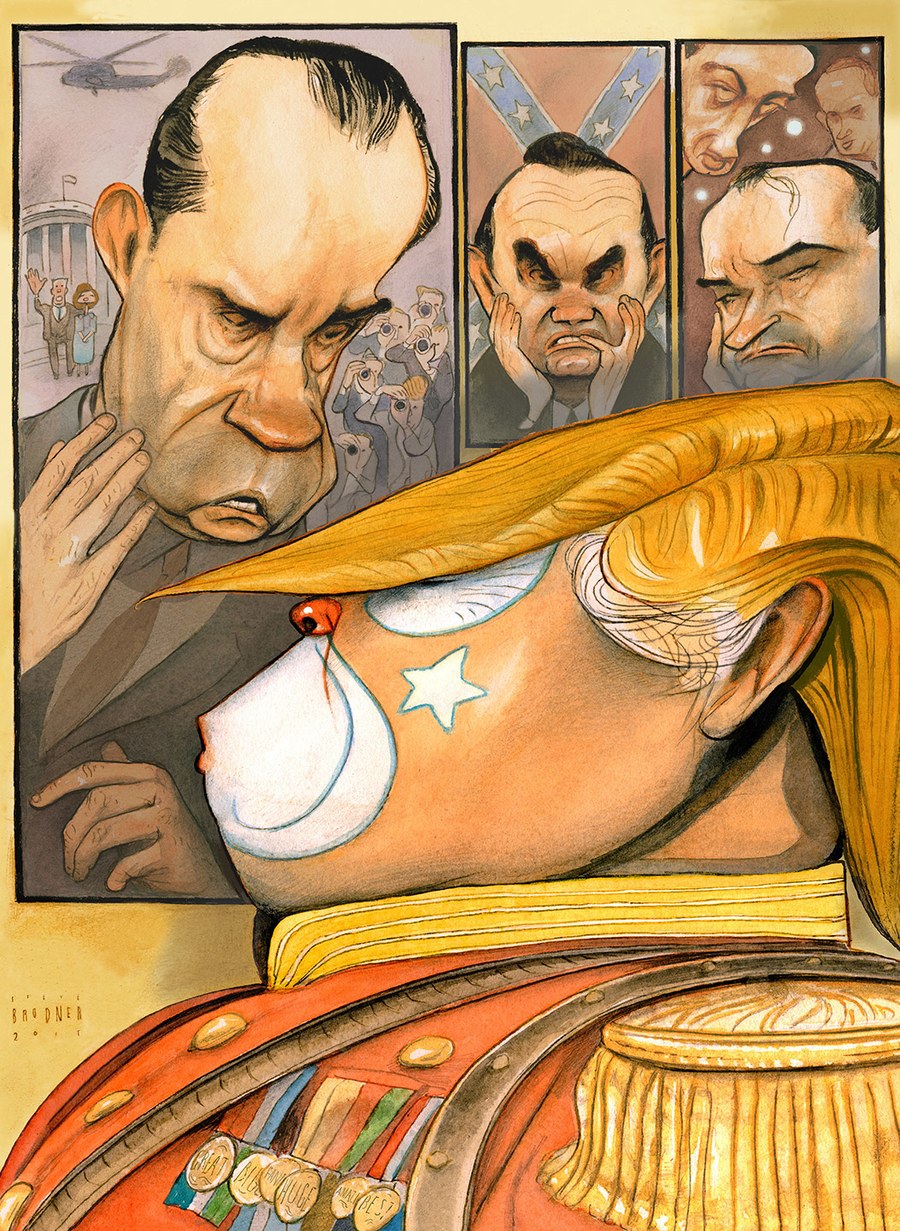 Sometimes a soaring rate of cockamamieness can leave us clueless about what to make of it and therefore unable to do anything about it.Those are the times when we seek out something—anything—with enough similarity to the new person or thing, to guess what we are dealing with. We see that in the current search for something Trump-like in our past, to help get a handle on the Trump in our present. Some have been wild enough to compare him with Hitler—which is simply absurd. Comparisons with lesser figures are not very helpful, either. Some dredge up bragging demagogues like Senator Joe McCarthy and Governor George Wallace. But neither of them rose as high as the presidency. And both of them had some concept of law, of which Trump is oblivious. (Both McCarthy and Wallace not only were lawyers but had been judges.)

Thus the default comparison has become with Richard Nixon. Rumors (or hopes) of impeachment have brought back onto the stage the whole cast of surviving players from the Watergate affair. There are some superficial resemblances between Trump and Nixon. Trump, like Nixon, has bottomless reserves of self-pity. Nixon, like Trump, was contemptuous of the press. But the dynamics in their cases are entirely different. Nixon pitied himself because the press fawned on the Beautiful People—jet-setters of the time. (How is it fair that fate made John Kennedy handsome and left me looking goofy?) Trump pities himself because the press will not pay unanimous homage to the most beautiful person in the world (who has the biggest jet of all). Trump openly loves himself as much as Nixon secretly loathed himself.

Another resemblance is their humorlessness. Senator Al Franken, an expert on laughter, noted early on that Trump does not laugh easily, if at all. He can sneer at Lyin’ Ted or Crooked Hillary, but others, not he, are supposed to laugh at this. Nixon, who was not spontaneous at anything, could not laugh spontaneously. Esquire magazine ran an annual feature with the caption “Why is this man laughing?” next to an awkward picture of Nixon in mad cachinnation. Nixon was too guarded to laugh (“Are they laughing at me?”). Trump is too pompous to break his mien of majestic superiority. There is a kind of rough equality in laughter, a sense that we are joining the club of humanity.

The worst thing journalist Murray Kempton could say of any man was that “he has no sense of sin.” Nixon knew he had sinned but pleaded that it was in self-defense against all the anticipated sins of his enemies. Trump admits the Bible is a good book, but he cannot read it, since his name is not in it. A friend of mine used to say of an acquaintance that he had “an overdeveloped instinct of self-preservation.” That was true of Nixon. He had to mount defenses against anticipated attacks from all sides. In Trump, the need for self-adulation has overwhelmed his sense of self-preservation. He will do things to assert his magnificent magnificence, which only exposes him to greater peril (including the peril of looking ludicrous). He sees things no one else does: Muslim crowds cheering the Twin Towers down, record crowds at his own inauguration, all the “illegal” voters bussed into New Hampshire, the many blacks and Muslims who like him. He erases from his mind anything that does not please him at the moment. He promised to give up all his business ties, as so much “peanuts” compared with the office of the presidency. (He has given up nothing; in fact he is busily adding to his riches.) He would, we were told, be so hard at work in the White House he could not go near a golf course. He would release his tax returns—but only when an elusive audit was completed or when Hillary released all her e-mails. Apparently we are to learn the full horror of what we have put in the Oval Office only when he leaves it.

“He possesses a monstrous pettiness, one of many anomalous combinations he pulls off.”

He claims a right to insult anyone or anything with impunity—whether it is women like Rosie O’Donnell, or war heroes like John McCain and Humayun Khan, or institutions like our “so-called” judges, or generals (he knows more than all of them), or NATO or the U.N., or scientists bringing off the “hoax” of climate change. It is tragically easy to think a man so petty he cannot be a deadly threat. But his is a monstrous pettiness, one of many anomalous combinations he pulls off—joining flashiness and furtiveness, from a man constantly on display yet hiding key dealings. He is a reticent blabbermouth. How to tally up the lies, to pick apart all the conflicts, to curb with the letter of the law a moral blindness on this scale? The truth is gradually dawning that there is no parallel to this thing we have lodged in our sacred Oval Office. He is that rarest of things, a true nonpareil.

Where will it end? The different legal procedures being explored—indictment, impeachment, mental disqualification—run up against his popular support. He has only a third of the country behind him, but its members have heavily invested their pride in his untouchability. They are a fierce and focused third of the country, against a diffuse and distracted two-thirds. Perhaps the only way an unparalleled menace can be countered is with an unparalleled and massive wave of moral revulsion. More people are growing ashamed of what we have done.

What did we expect when we let a man of dicey business dealings enter the White House without revealing his tax returns? How could we? People who have crawled to him are feeling the sickness of shame. Many do not want to work for him. He has a government of empty offices. Formerly reputable Republicans are wearying of the strange defenses they have felt bound to invent for him. Marches against him must increase in size and frequency. More people must resign from office on principle. More people must explain why they refused his offers of government positions. He degrades women. He degrades races and religions. He degrades us. The nation needs purification. May it come before it is too late.