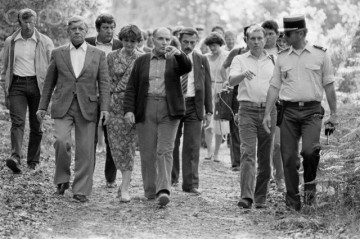 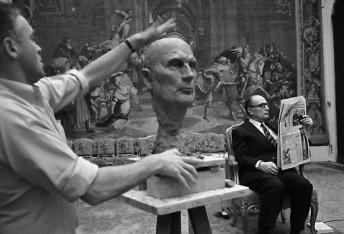 Francois Mitterrand – Man of Action, Man of Words – Review of Philip Short’s, A Taste For Intrigue.

Sitting up late one evening at Latche, I hear, all around me, talk of life and death, the origins of the world and the existence of God, the beyond and nothingness. The battle rages in both camps. What certainties on either side! They demonstrate, decide definitely, assert authoritatively. I listen and think that though I like those who ask themselves questions. I am wary of those who find answers.”
Francois Mitterrand – The Wheat and the Chaff

A man who lives the myths of his country is valued by its citizens because he shows through his actions and words what life is about, what its culture is.

The concept of country in France is as rich and fierce as any on earth, embodying Greek polis, the rule of monarchs, pagan cults, Roman poetry and oration, and Christianity in all of its beauty and beastiality.

Mitterrand, given his unique character, provided this composite for citizens to project upon, and to see themselves and to take in correspondences.

He stirred the thinking of the people. He defined causes worthy of engagement. He was fortunate in that human events were presented that allowed for the full expression of human action in the present.

He echoed de Gaulle, Napoleon, Robespierre and Louis XIV the sun king: strength, tolerance and justice for all people, leadership in the world community, the rule of law.

His actions as president strengthened the democracy, rebuilt the architecture of learning and created paths to adjust France to the new globalism and a European union. He knew where he wanted to take the people, a socialism that created equality for its citizens, a culture that blended Voltaire’s Treatise on Tolerance with the pragmatism of the American William James.

Mitterrand was a complex individual. He was highly mannered, a mesmerizing orator, a friend’s friend and a fierce opponent. These characteristics were honed in a rich family life. He grew up in the provinces, raised Catholic in a large family where books and learning were held in high regard and where the perception of money was devalued. He learned the rules of class from commerce (cognac vs vinegar) and religion (protestant vs Catholic). Entering Catholic boarding school at ten, he left the provinces for Paris at eighteen to enroll in two French colleges where he studied law, literature and politics with honors. He engaged in literary work beginning in the Catholic school through college and into the military and beyond. He was a strong writer and editor and applied the knowledge of literature and culture in most of his endeavors. Mitterrand developed a rigorous use of logic that is uniquely French – highly rational, academic and just.

He was a front line participant in losing his country and winning it back.

“In six weeks, four fifths of the French army deployed against Germany was taken prisoner….1.8 million soldiers were captured. … they were sent to POW camps inside Germany.” 1.

“Mitterrand was wounded on June 14, 1940, near the village of Stenay, by an exploding shell fragment that lodged in his back.” 2.

After WWII Mitterrand entered civilian life and joined the French political establishment where he operated for decades before his election to president in 1981. It is this period that Short spends most of the book describing in excruciating detail.

Philip Short has made an important contribution to Mitterrand works available in English. His reportorial style is fact based and walks the reader through Mitterrand’s chronological life steps. Mr Short reported on Mitterrand and other French issues for the BBC for several years in the 1980’s thus giving him a base of experience for the book.

Today there is an ongoing literary renaissance of French books, essays and films that celebrate Mitterrand’s life. It is hoped that more books will be translated into English. It is unfortunate for Americans that France is largely lost through the veil of language as it is the central host of the culture most important to the founding of America and the structure of its culture.
Notes