My life as a concert pianist can be frustrating, lonely, demoralising and exhausting. But is it worth it? Yes, without a shadow of a doubt.

‘Isn’t it worth fighting back in some small way?’ Pianist James Rhodes. Photograph: Dave Brown 2012

After the inevitable “How many hours a day do you practice?” and “Show me your hands”, the most common thing people say to me when they hear I’m a pianist is “I used to play the piano as a kid. I really regret giving it up”. I imagine authors have lost count of the number of people who have told them they “always had a book inside them”. We seem to have evolved into a society of mourned and misplaced creativity. A world where people have simply surrendered to (or been beaten into submission by) the sleepwalk of work, domesticity, mortgage repayments, junk food, junk TV, junk everything, angry ex-wives, ADHD kids and the lure of eating chicken from a bucket while emailing clients at 8pm on a weekend.

Do the maths. We can function – sometimes quite brilliantly – on six hours’ sleep a night. Eight hours of work was more than good enough for centuries (oh the desperate irony that we actually work longer hours since the invention of the internet and smartphones). Four hours will amply cover picking the kids up, cleaning the flat, eating, washing and the various etceteras. We are left with six hours. 360 minutes to do whatever we want. Is what we want simply to numb out and give Simon Cowell even more money? To scroll through Twitter and Facebook looking for romance, bromance, cats, weather reports, obituaries and gossip? To get nostalgically, painfully drunk in a pub where you can’t even smoke?

What if you could know everything there is to know about playing the piano in under an hour (something the late, great Glenn Gould claimed, correctly I believe, was true)? The basics of how to practise and how to read music, the physical mechanics of finger movement and posture, all the tools necessary to actually play a piece – these can be written down and imparted like a flat-pack furniture how-to-build-it manual; it then is down to you to scream and howl and hammer nails through fingers in the hope of deciphering something unutterably alien until, if you’re very lucky, you end up with something halfway resembling the end product.

What if for a couple of hundred quid you could get an old upright on eBay delivered? And then you were told that with the right teacher and 40 minutes proper practice a day you could learn a piece you’ve always wanted to play within a few short weeks. Is that not worth exploring?

What if rather than a book club you joined a writer’s club? Where every week you had to (really had to) bring three pages of your novel, novella, screenplay and read them aloud?

What if, rather than paying £70 a month for a gym membership that delights in making you feel fat, guilty and a world away from the man your wife married you bought a few blank canvases and some paints and spent time each day painting your version of “I love you” until you realised that any woman worth keeping would jump you then and there just for that, despite your lack of a six-pack?

I didn’t play the piano for 10 years. A decade of slow death by greed working in the City, chasing something that never existed in the first place (security, self-worth, Don Draper albeit a few inches shorter and a few women fewer). And only when the pain of not doing it got greater than the imagined pain of doing it did I somehow find the balls to pursue what I really wanted and had been obsessed by since the age of seven – to be a concert pianist.

Admittedly I went a little extreme – no income for five years, six hours a day of intense practice, monthly four-day long lessons with a brilliant and psychopathic teacher in Verona, a hunger for something that was so necessary it cost me my marriage, nine months in a mental hospital, most of my dignity and about 35lbs in weight. And the pot of gold at the end of the rainbow is not perhaps the Disney ending I’d envisaged as I lay in bed aged 10 listening to Horowitz devouring Rachmaninov at Carnegie Hall.

My life involves endless hours of repetitive and frustrating practising, lonely hotel rooms, dodgy pianos, aggressively bitchy reviews, isolation, confusing airline reward programmes, physiotherapy, stretches of nervous boredom (counting ceiling tiles backstage as the house slowly fills up) punctuated by short moments of extreme pressure (playing 120,000 notes from memory in the right order with the right fingers, the right sound, the right pedalling while chatting about the composers and pieces and knowing there are critics, recording devices, my mum, the ghosts of the past, all there watching), and perhaps most crushingly, the realisation that I will never, ever give the perfect recital. It can only ever, with luck, hard work and a hefty dose of self-forgiveness, be “good enough”.

And yet. The indescribable reward of taking a bunch of ink on paper from the shelf at Chappell of Bond Street. Tubing it home, setting the score, pencil, coffee and ashtray on the piano and emerging a few days, weeks or months later able to perform something that some mad, genius, lunatic of a composer 300 years ago heard in his head while out of his mind with grief or love or syphilis. A piece of music that will always baffle the greatest minds in the world, that simply cannot be made sense of, that is still living and floating in the ether and will do so for yet more centuries to come. That is extraordinary. And I did that. I do it, to my continual astonishment, all the time.

The government is cutting music programmes in schools and slashing Arts grants as gleefully as a morbidly American kid in Baskin Robbins. So if only to stick it to the man, isn’t it worth fighting back in some small way? So write your damn book. Learn a Chopin prelude, get all Jackson Pollock with the kids, spend a few hours writing a Haiku. Do it because it counts even without the fanfare, the money, the fame and Heat photo-shoots that all our children now think they’re now entitled to becauseHarry Styles has done it.Charles Bukowski, hero of angsty teenagers the world over, instructs us to “find what you love and let it kill you“. Suicide by creativity is something perhaps to aspire to in an age where more people know Katie Price better than the Emperor concerto. 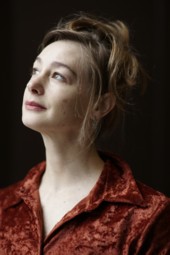 The video for the line spoken by Czeslaw Milosz.
Production completed with the participation of students in the art school under the supervision of Monica Opole Nowojskiej.
Content of the poem:
Czeslaw Milosz – The Angels

You deducted white robes,
Wings and even the existence,
However, I believe you,
Messengers.

Where on the left side of the inverted world
A heavy fabric embroidered stars and animals,
Truthful-old watching the stitches.

Brief your stop here
Jutrzennym think about the time when the sky is clear,
The melody repeated by a bird,
Or the smell of apples in the evening
When the light enchanted orchards.

They say that someone was invented
But it does not convince me.
Because people also came up with themselves.

The voice – this is probably evidence
Because beings undoubtedly belongs to the light,
Light, winged (why not)
Girded lightning.

I heard a voice in his sleep sometimes
And, what is more strange, I understood more or less
Warrant or summons in the supernal language:

just days
another
do what you can.