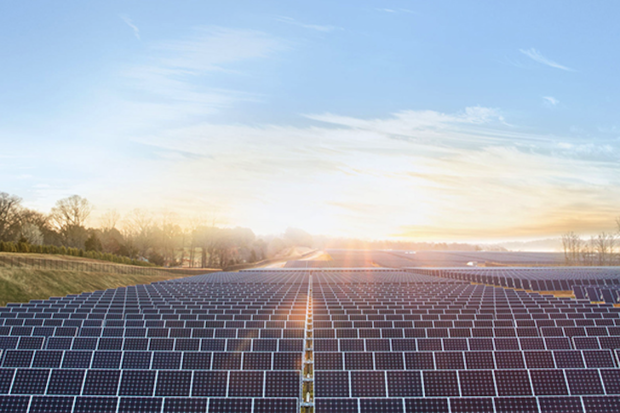 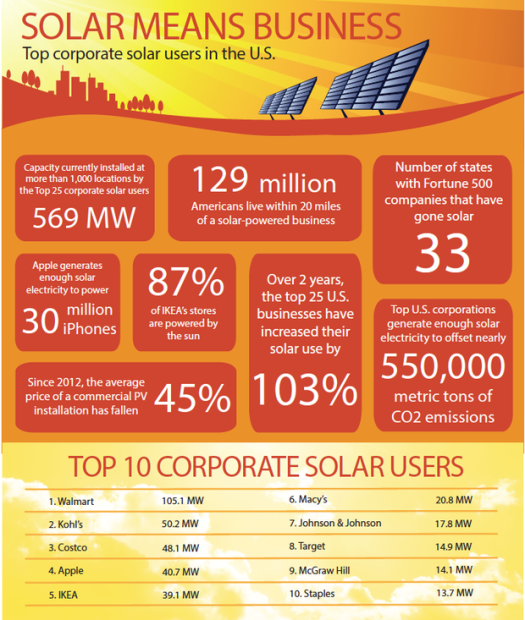 Apple over the next year or so is expected to surpass Walmart as the largest corporate user of solar power.

The company this week announced it will invest $850 million to build a solar power plant through a partnership with First Solar, one of the nation’s largest photovoltaic (PV) manufacturers and provider of utility-scale PV plants. Through a 25-year purchasing agreement, Apple will get 130MW (megawatts, or million watts) from the new plant.

“This deal is like an insurance policy for Apple; the sun will still be shining 25 years from now, so Apple can be sure they will be getting emissions-free power at the same reasonable cost — even in 2040,” said Amit Ronen, director of George Washington University’s Solar Institute.

The new solar project is notable for a number of reasons.

“First, from what we can tell, this is the largest commercial solar deal ever in the U.S.,” Ronen said. “And it’s a pioneering example of how a major retail electricity customer can go to the market to obtain the kind of power they want to receive at a competitive price.”

The Apple/Solar City project ranks in the top 10 of U.S. PV installations. (In addition to Apple, PG&E will get 150MW from the plant.)
Currently, the largest solar power plant operating in the world is the Desert Sunlight Solar Farm in Riverside County, Calif., and the Topaz Solar Farm in San Luis Obispo County, Calif. Both offer 550MW of capacity, according to Ronen.

An even larger 750MW solar facility has been approved and will be built by McCoy Solar Energy, “and even larger solar power plants have been proposed in India,” Ronen said.

Walmart has led corporate America in deploying PV panels. Almost all have been rooftop installations at store and corporate office locations. It has held the top spot for solar power capacity use for at least the past three years, according to Ken Johnson, vice president of communications with the Solar Energy Industry Association (SEIA).

Apple is now on the cusp of taking that spot, Johnson said, leaping from fourth place behind Walmart, Kohl’s and Costco. (IKEA is fifth.)

Apple already has several large solar power installations around the U.S. Its largest, the 100-acre solar field in Maiden, N.C., boasts 14MW of capacity for its nearby data center. In 2013, Apple announced plans to build an 18MW solar plant to power a new data center in Reno.

The California project, however, dwarfs all previous ones.

“It’s a huge project. This is a really significant investment by a single company in solar power. Apple is really taking it to the next level with its commitment to renewable energy,” Johnson said.

According to Apple CEO Tim Cook, the new project will cover 1,300 acres in an area about an hour south of Apple’s Silicon Valley headquarters. That area is the equivalent of about 1,000 football fields.

California, by far, leads the nation in deployment of solar power. Of 20GW (billion watts) of solar capacity currently deployed in the U.S., California installations represent 8.54GW. Arizona, with 1.9GW of solar capacity, and New Jersey with 1.3GW, are a distant second and third, according to the Solar Energy Industry Association (SEIA).

Solar installations are growing at a staggering rate. Last year, solar capacity in the U.S. grew 40%, or by 7.2GW.

“More and more companies nationwide are beginning to invest it solar energy for both economic and environmental reasons,” Johnson said.