This is an interview with Gary Synder while he was back east for a joint presentation with Wendell Berry. 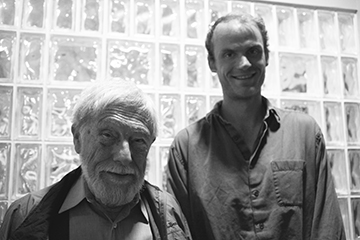 By JONATHAN BASTIAN
Gary Snyder and WFPL’s Jonathan Bastian
Born in 1930, Gary Snyder is one of the last surviving writers of the Beat Generation — a generation that included Jack Kerouac and Allen Ginsberg.

Snyder is a naturalist, an essayist and devout Buddhist. At the age of 26, he said goodbye to the Beats in San Francisco, and lived for seven years in Japan, studying at a Zen monastery. He won the Pulitzer prize in poetry in 1974.

His most recent book is a collaborative effort featuring Kentucky’s Wendell Berry. The book is called, “Distant Neighbors: The Selected Letters of Wendell Berry and Gary Snyder.” Snyder and Berry met in the 1970s, and since then, have been corresponding regularly over myriad issues, while always circling back to nature and agriculture. They will be in conversation Wednesday at the Festival of Faiths, at 7 p.m., at Actors Theatre.

Gary Snyder joined me for a conversation at our WFPL studios. We discussed his early years in Washington state, where he developed a deep connection to the land. I also asked him about his love for Buddhism, his memories meeting Jack Kerouac, and much more.