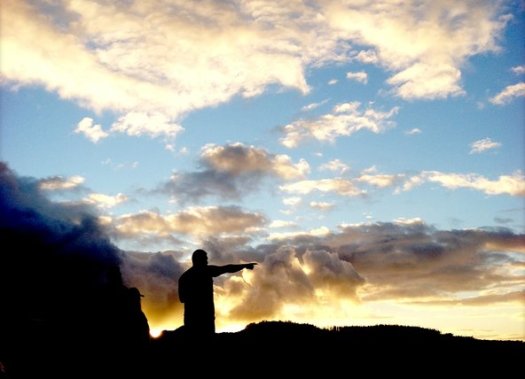 A startling soldier’s story of war and our future. Compact in its unfolding, but strong in its philosophical architecture. Listen up.

Driving into Iraq just after the 2003 invasion felt like driving into the future. We convoyed all day, all night, past Army checkpoints and burned-out tanks, till in the blue dawn Baghdad rose from the desert like a vision of hell: Flames licked the bruised sky from the tops of refinery towers, cyclopean monuments bulged and leaned against the horizon, broken overpasses swooped and fell over ruined suburbs, bombed factories, and narrow ancient streets.

Civilizations have marched blindly toward disaster because humans are wired to believe that tomorrow will be much like today.

With “shock and awe,” our military had unleashed the end of the world on a city of six million — a city about the same size as Houston or Washington. The infrastructure was totaled: water, power, traffic, markets and security fell to anarchy and local rule. The city’s secular middle class was disappearing, squeezed out between gangsters, profiteers, fundamentalists and soldiers. The government was going down, walls were going up, tribal lines were being drawn, and brutal hierarchies savagely established.
I was a private in the United States Army. This strange, precarious world was my new home. If I survived.
Two and a half years later, safe and lazy back in Fort Still, Okla., I thought I had made it out. Then I watched on television as Hurricane Katrina hit New Orleans. This time it was the weather that brought shock and awe, but I saw the same chaos and urban collapse I’d seen in Baghdad, the same failure of planning and the same tide of anarchy. The 82nd Airborne hit the ground, took over strategic points and patrolled streets now under de facto martial law. My unit was put on alert to prepare for riot control operations. The grim future I’d seen in Baghdad was coming home: not terrorism, not even W.M.D.’s, but a civilization in collapse, with a crippled infrastructure, unable to recuperate from shocks to its system.
And today, with recovery still going on more than a year after Sandy and many critics arguing that the Eastern seaboard is no more prepared for a huge weather event than we were last November, it’s clear that future’s not going away.
This March, Admiral Samuel J. Locklear III, the commander of the United States Pacific Command, told security and foreign policy specialists in Cambridge, Mass., that global climate change was the greatest threat the United States faced — more dangerous than terrorism, Chinese hackers and North Korean nuclear missiles. Upheaval from increased temperatures, rising seas and radical destabilization “is probably the most likely thing that is going to happen…” he said, “that will cripple the security environment, probably more likely than the other scenarios we all often talk about.’’
Locklear’s not alone. Tom Donilon, the national security adviser,said much the same thing in April, speaking to an audience at Columbia’s new Center on Global Energy Policy. James Clapper, director of national intelligence, told the Senate in March that “Extreme weather events (floods, droughts, heat waves) will increasingly disrupt food and energy markets, exacerbating state weakness, forcing human migrations, and triggering riots, civil disobedience, and vandalism.”
On the civilian side, the World Bank’s recent report, “Turn Down the Heat: Climate Extremes, Regional Impacts, and the Case for Resilience,” offers a dire prognosis for the effects of global warming, which climatologists now predict will raise global temperatures by 3.6 degrees Fahrenheit within a generation and 7.2 degrees Fahrenheit within 90 years. Projections from researchers at the University of Hawaii find us dealing with “historically unprecedented” climates as soon as 2047. The climate scientist James Hansen, formerly with NASA, has argued that we face an “apocalyptic” future. This grim view is seconded by researchers worldwide, including Anders Levermann, Paul and Anne Ehrlich,Lonnie Thompson and many, many, many others.
This chorus of Jeremiahs predicts a radically transformed global climate forcing widespread upheaval — not possibly, not potentially, but inevitably. We have passed the point of no return. From the point of view of policy experts, climate scientists and national security officials, the question is no longer whether global warming exists or how we might stop it, but how we are going to deal with it.
II.
There’s a word for this new era we live in: the Anthropocene. This term, taken up by geologists, pondered by intellectuals and discussed in the pages of publications such as The Economist and the The New York Times, represents the idea that we have entered a new epoch in Earth’s geological history, one characterized by the arrival of the human species as a geological force. The Nobel-Prize-winning chemist Paul Crutzen coined the term in 2002, and it has steadily gained acceptance as evidence has increasingly mounted that the changes wrought by global warming will affect not just the world’s climate and biological diversity, but its very geology — and not just for a few centuries, but for millenniums. The geophysicist David Archer’s 2009 book, “The Long Thaw: How Humans are Changing the Next 100,000 Years of Earth’s Climate,” lays out a clear and concise argument for how huge concentrations of carbon dioxide in the atmosphere and melting ice will radically transform the planet, beyond freak storms and warmer summers, beyond any foreseeable future.
The Stratigraphy Commission of the Geological Society of London — the scientists responsible for pinning the “golden spikes” that demarcate geological epochs such as the Pliocene, Pleistocene, and Holocene — have adopted the Anthropocene as a term deserving further consideration, “significant on the scale of Earth history.”Working groups are discussing what level of geological time-scale it might be (an “epoch” like the Holocene, or merely an “age” like the Calabrian), and at what date we might say it began. The beginning of the Great Acceleration, in the middle of the 20th century? The beginning of the Industrial Revolution, around 1800? The advent of agriculture?

Every day I went out on mission in Iraq, I looked down the barrel of the future and saw a dark, empty hole.

The challenge the Anthropocene poses is a challenge not just to national security, to food and energy markets, or to our “way of life” — though these challenges are all real, profound, and inescapable. The greatest challenge the Anthropocene poses may be to our sense of what it means to be human. Within 100 years — within three to five generations — we will face average temperatures 7 degrees Fahrenheit higher than today, rising seas at least three to 10 feet higher, and worldwide shifts in crop belts, growing seasons and population centers. Within a thousand years, unless we stop emitting greenhouse gases wholesale right now, humans will be living in a climate the Earth hasn’t seen since the Pliocene, three million years ago, when oceans were 75 feet higher than they are today. We face the imminent collapse of the agricultural, shipping and energy networks upon which the global economy depends, a large-scale die-off in the biosphere that’s already well on its way, and our own possible extinction. If homo sapiens (or some genetically modified variant) survives the next millenniums, it will be survival in a world unrecognizably different from the one we have inhabited.

Roy Scranton served in the United States Army from 2002 to 2006. He is a doctoral candidate in English at Princeton University, and co-editor of “Fire and Forget: Short Stories from the Long War.” He has written for The New York Times, Boston Review, Theory & Event and recently completed a novel about the Iraq War. Twitter @RoyScranton.