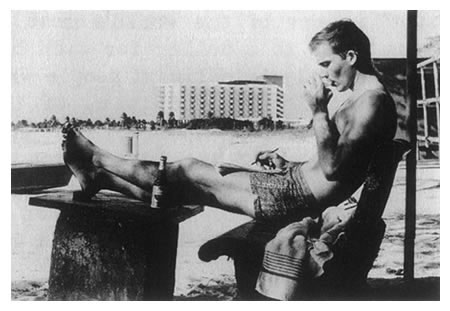 This is Hunter Thompson reporting on many things from Key West, Fl as he pens an article for the Rolling Stone in 1976. Reading Thompson reminds me of his colorful journalism that borders on genius. He took Tom Wolfe’s devices and made them his own – he is certainly unique and how he manages to do as much booze and drugs and still writes with precision and insight is beyond me. What is amazing is that his exaggerations nearly always have a large element of truth and fact – he was one journalist that would put out there what he saw and thought and had little regard for consequence. He was refreshing and radical and real all at the same time. He had the wonderful ability to make quick judgements (normaly after much backgrounding in life and literature), was a hugh learner and had the gift of articulation and so many levels. You don’t have to like the man to learn form him.

This piece from the article illustrates just how very strange the world was as I was growing up and learning the ropes. Romney is an angel compared to Nixon:

Jimmy Carter and the Great Leap of Faith – Hunter Thompson

A lot of people will tell you that horses get spooked because they’re just naturally nervous and jittery,

but that ain’t right. What you have to remember is that a horse sees things maybe six or seven times bigger than we do.

— BILLY HERMAN, a harness-racing trainer at Pompano Park in Miami

…”The power of the presidency is so vast that it is probably a good thing, in retrospect, that only a very few people in this country understood the gravity of Richard Nixon’s mental condition during his last year in the White House. There were moments in that year when even his closest friends and advisers were convinced that the president of the United States was so crazy with rage and booze and suicidal despair that he was only two martinis away from losing his grip entirely and suddenly locking himself in his office long enough to make that single telephone call that would have launched enough missiles and bombers to blow the whole world off its axis or at least kill 100 million people.

The sudden, hellish reality of a nuclear war with either Russia or China or both was probably the only thing that could have salvaged Nixon’s presidency after the Supreme Court ruled that he had to yield up the incriminating tapes that he knew would finish him off. Would the action-starved generals at the Strategic Air Command Headquarters have ignored an emergency order from their Commander-in-chief? And how long would it have taken Pat Buchanan or General Haig to realize that ‘The Boss” had finally flipped? Nixon spent so much time alone that nobody else in the White House would have given his absence a second thought until he failed to show up for dinner, and by that time he could have made enough phone calls to start wars all over the world.

A four-star general commandant of the U.S. Marine Corps with three wars and 35 years of fanatical devotion to duty, honor and country in his system would hack off his own feet and eat them rather than refuse to obey a direct order from the president of the United States — even if he thought the president was crazy.

The key to all military thinking is a concept that nobody who ever wore a uniform with even one stripe on it will ever forget: “You don’t salute the man, you salute the uniform.” Once you’ve learned that, you’re a soldier — and soldiers don’t disobey orders from people they have to salute. If Nixon’s tortured mind had bent far enough to let him think he could save himself by ordering a full-bore Marine/Airborne invasion in Cuba, he would not have given the Boom-Boom order to some closet-pacifist general who might be inclined to delay the invasion long enough to call Henry Kissinger for official reassurance that the president was not insane.

No West Pointer with four stars on his hat would take that kind of risk anyway. By the time word got back to the White House, or to Kissinger, that Nixon had given the order to invade Cuba, the whole Caribbean would be a sea of fire; Fidel Castro would be in a submarine on his way to Russia, and the sky above the Atlantic would be streaked from one horizon to the other with the vapor trails of a hundred panic-launched missiles.

Right. But it was mainly a matter of luck that Nixon’s mental disintegration was so obvious and so crippling that by the time he came face to face with his final option, he was no longer able to even recognize it. When the going got tough, the politician who worshiped toughness above all else turned into a whimpering, gin-soaked vegetable. . . But it is still worth wondering how long it would have taken Haig and Kissinger to convince all those SAC generals out in Omaha to disregard a Doomsday phone call from the president of the United States because a handful of civilians in the White House said he was crazy.

Ah. . . but we are wandering off into wild speculation again, so let’s chop it off right here. We were talking about the vast powers of the presidency and all the treacherous currents surrounding it. . . Not to mention all the riptides, ambushes, Judas goats, fools and ruthless, dehumanized thugs that will sooner or later have to be dealt with by any presidential candidate who still feels strong on his feet when he comes to that magic moment for the leap from Stage Two to Stage Three.

But there will be plenty of time for that later on. And plenty of other journalists to write out it. . . But not me. The most active and interesting phase of a presidential campaign is Stage One, which is as totally different from the Sturm und Drang of Stage Three as a guerrilla-style war among six or eight Gypsy nations is totally different from the bloody, hunkered down trench warfare that paralyzed and destroyed half of Europe during World War I.”