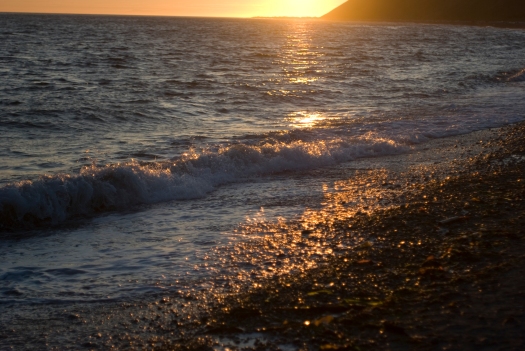 I have been reading Thomas Merton in the last few weeks in his book, “Zen and the Birds of Appetite”. It was written in the late 60s and his point of reference in learning is D.T. Suzuki, who was then the most popular translator of Zen to the western world. When I started the book I almost put it down for good since he begins comparing Zen to Christianity which in my mind cannot be done. Later in the book he admits this – they are apples and oranges. Zen is a way of being and thinking, nearly a philosophy but not quite. I think that it is similar to existentialism in the West, since it has a similar wonder of existence. In chapter three, A Christian Looks at Zen, Merton starts to dig in and really begins to give himself to zen thinking and proceeds to do an excellent job of explication. Here are a few examples:

“The whole aim of zen is not to make foolproof statements about experience , but to come to direct grips with reality without the mediation of logical verbalizing.” p. 37

“… Zen seeks not to explain but to pay attention, to become aware, to be mindful, in other words to develop a certain kind of consciousness that is above and beyond deception by verbal formulas…” p. 39

” What Zen communicates is unawareness that its potentially already there but is not conscious of itself.” p. 47

” The language used by Zen is therefore in some sense an anti language, and the “logic” of Zen is a radical reversal of philosophic logic. The human dilemma of communication is that we cannot communicate ordinarily without words and signs, but even ordinary experience tends to be falsified by our habits of verbalization and rationalization. the convenient tools of language enable us to decide beforehand what we think things mean, and tempt us all too easily to see things only in a way that fits our logical preconceptions and our verbal formulas. Instead of seeing things and facts as they are we wee them as reflections and verifications of the sentences we have previously made up in our minds. We quickly forget how to simply see things and substitute our fords and our formulas for the things themselves, manipulating facts so that we see only what conveniently fits our prejudices.” p. 49

Zen can be either a religion or not. I prefer too practice the, not. If Zen is combined with Buddhism and particularly Mahāyāna then much religion can be added in terms of scripture, deities and other religious components.

The most difficult thing to grasp about Zen is the struggle with letting duality go. Much Zen philosophy, abstruse philosophy, delves into this nature. (Many of the nonsensical zen passages that are quoted are teasing with the duality implied.)  It appears to me now that this is intellectualizing “being”, when it just is. I think it is a chicken and egg drill, the philosophy is intended to teach how to see before language and logic, but this is certainly a challenge. If one practices seeing without judging then one is on a zen path in my way of looking at things. I reserve the right to change my mind if I find that the understanding of dualistic thinking allows me to see clearer what is before me in the moment.